I was born in Paris and I have been living in Rome for some forty years. My studies in classical literature and Christian iconography at the Sorbonne normally suggested a teaching career. And in fact, I taught literature for many years until one day, taking a side road, I fell headlong into photography, which has since become my own peculiar mode of expression. True, already as a student I had begun taking photographs in the ruins of Ostia Antica: I was inspired by the colored motifs of the mosaics of a Roman villa. Then Italy, Greece, Brittany, where I have my roots, Portugal, Russia: these countries of my personal geography have constituted the stages of my visual adventure.

In Greece, the Island of Patmos became my place of predilection. The emotion experienced on Patmos was so incredibly strong. The dazzling beauty of the light was for me a beginning, an initiation in my photographic journey. The Island became my master, it formed me; it opened my eyes. This was the start of a long apprenticeship of the play of light on things, on objects, which become signs of something other in an expanded space open to the invisible. The “writing of the light”, for such is the meaning of the word “photography”, caused me to look at the world with more care, more lovingly.

I don’t program my photographs. Rather, I start with ideas, unconscious wishes looking to be expressed. Certain spaces, certain landscapes attract me, speak to me more than others. I am always fascinated by the stunning capacity light has to transform and to transfigure the things I see. The real subject is light itself. In Patmos, especially, walls, alleys, surfaces, insignificant as such, become subjects of pure light.

In my approach to reality, I often isolate a fragment of matter, something, which attracts my attention, which leads me to focus on and to guide my eye to what is essential.

This photographic journey invited me to look beyond appearances, to move through the progressive stages of an interior journey in an attempt to free myself from what is not essential, to empty myself and to enter silence … It is a profound experience, and also one of communion: I’ve always been sensitive, during my shows, to the reaction of a public, which is very often receptive and touched by the photographic images. And this, I would say, has confirmed me in my work. 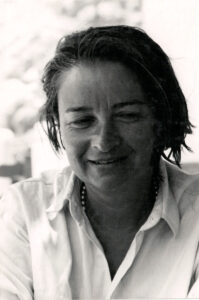