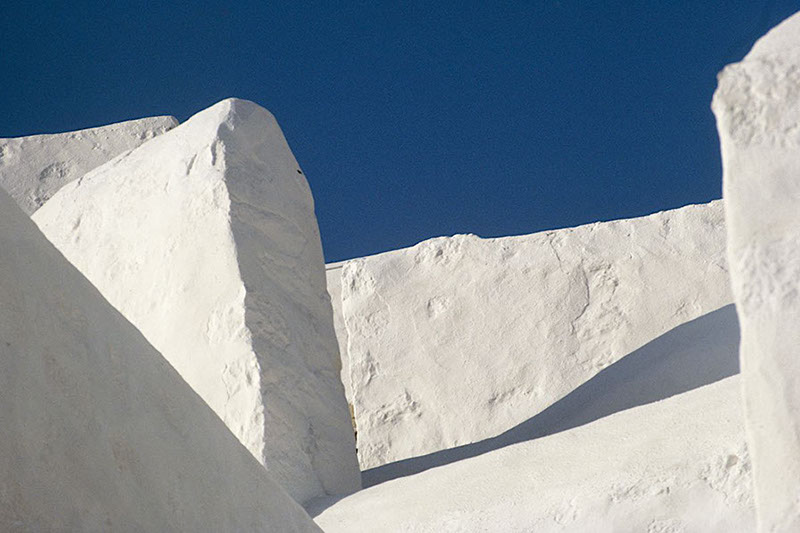 “I was on the Island of Patmos,” writes St. John in the Book of Revelations. More than forty years ago, I too was on the Island of Patmos. I had gone to see the place of John’s visions but I didn’t know that I’d be repeating this voyage every summer and that Patmos would become the source of a spiritual experience. Of course, for me there were no visions, no voices, no ecstasies. But I discovered an island where I was taken captive by the beauty, the silence, the light, the harshness of the landscapes and it was the beginning of a long interior journey, which would pass through work, effort, contemplation, and training my eye on things. I was a photograph and I looked and looked again and again, meandering through the alleys of Chora, these alleys, which embrace the fortress of the Monastery of Saint John. Alleys, walls, steps: so many elements, insignificant at first glance, which would become in an instant, in the space of a glance, thanks to the miracle of light, the space of an opening, a dent on the invisible, beyond appearances.

I photographed the dawn and the dusk, I pursued the shadow and the light, I questioned the immaculate whiteness of the whitewashed walls, I stood in suspense before the azure, the intense blue of the sea and of the sky, I breathed in the perfume of the air full of the smells of incense.

Of course, I was far from the apocalyptic visions of the exiled Apostle but I sensed the Mystery of another light, the glimmer espied, one day, in the eyes of a woman, Marika, who lived in a hamlet called Christos. It’s true that man is always absent from these photographs. Nobody appears around the corner of the alley, in the silence of the stones, but I’d like to say that during all these years I’ve lived in happy proximity with the islanders. I remember some names: Vassili coming up from Kippo in the evening with his donkey loaded with tomatoes, Antonio, the cobbler, tanning his skins by the sea to make his beautiful sandals; Dimitri and Gregora and all those I can’t name. I remember too peaceful moments with peasants who had a parcel of cultivated land by the sea. We said little: a few words in Greek which said peace, tranquility, hesychia: that terms so dear to the monks of the Christian East.

Patmos also meant the liturgies, the Hymn of the Cherubims, sung by the monks, chants coming from the depths of ages past; the Holy Icons contemplated on the walls of the sanctuary, the incantatory and meditative beauty of the Divine Liturgy.

One particular September 8th while walking in Chora to the Monastery of Saint John, I entered a small chapel. The icon of the Theotokos was watching. Everything was silence. Outside, the sky shone a spotless blue, the cocks flung their cries, the land exuded its smells, somewhere incense was burning, on the impassible sea one could see a frail skiff in the distance.

The land of Patmos formed me, opened my eyes. By photographing over and over again the same alleys, the same stairs, in the perimeter encircling the fortress of the great monastery, I strove for purity; I gave up what wasn’t essential and so, over the years, I’ve tended toward more simplicity, more abstraction, less matter.